1
"every direction"
t h e  i n s p i r a t i o n
"One early morning following one very late night in the summer of 2019, I found myself on the sofa, slowly waking and very sad.  Increasingly sad.
Semi-awake, re-entering the world, I realized the sadness was about the death of a wonderful friend over a year earlier.  He was the husband of a very close, long-time friend. Truly magnificent people.
The next thing I knew I was crying my eyes out, the deep kind of crying where you hear strange animal-like sounds and realize the sounds are coming from you. (I've heard these sounds before.)  All the emotion seemed to have opened my heart again.
​I pulled myself together, went out back, then went to light a smoke when I heard a quiet voice in my head say, "Close your eyes."  (I never hear voices, quiet voices much less, telling me to do things.  Ever.)  But in that moment I listened and closed my eyes.
Immediately the peace and quiet calmed me.  (It probably also helped that it was four in the morning.)
The next thing I knew, with my eyes still closed, I saw The Sun in front of me and I realized I was in space (you know, the place astronauts go).
I looked down and saw The Earth below me.  Looking around I could see  the moon, the other planets, comets, meteors, asteroids -- the cosmos, not in detail, but clearly enough to realize I was most certainly looking at our entire solar system.
Then I heard the same voice say,  "Everything is ok." and I could feel that everything was indeed ok. All was well. I'd gone from feeling profoundly sad to feeling extremely calm, all in less than 15 minutes.  It kind of blew me away.
I had a bunch of online business to take care of later that morning, and already wide awake, decided to get an early start.
About a half hour into working, while doing a Google search, instead of related search results popping up, something called Law of Attraction did.
I am no stranger to the magical, the mystical, and the esoteric, so after experiencing this highly unusual series of early morning events, I decided to do some research.
I dove into this new material, studying everything I could.   In short order it became very clear I'd been using the Law of Attraction my entire life, but without realizing it.  That was why the great things happened (and didn't seem to happen to so many others), why things happened the way they did.
It also became very clear that many people are not aware of The Law of Attractien, just as l wasn't prior to this experience.
I started to really look around.  I saw people suffering needlessly, living without their God given guidance.
They were missing some vital information.  Vital, that is, once you even know The Law Attraction exists, just as surely as the Law of Gravity does.
Look around.  Some people don't seem to understand where they are, who they really are, how this place (The Universe) works, or that it even does.
Those realizations on that particular morning and all of the experiences leading up to it inspired me to create the series you are about to view.
My prior paintings lean toward realism, although they are not realistic.  They are often vibrant in color.
These new paintings are different --
abstract and mostly monochromatic (except two).  And, for the first time ever, i use words front and center  in each painting.
​b a c k s t o r y
While studying at School of Visual Arts in New York, my art history professor taught me that rather than paintings being displayed where the public can see them, most paintings end up in elite homes, where the public has almost no chance of ever seeing them.
I made a vow that my art would never end up isolated in wealthy patron's homes.
Then after receiving exhibition offers that would happen four years later, my stomach decided I should try another route.
I started painting murals for wealthy patrons, and surprise, my work was only seen by my patrons and their guests -- never the public.
​All these years later, I have the opportunity to have these new paintings seen by the public, at last.  :)
I am pleased to present paintings from my newest series, "EVERY DIRECTION".  I hope these paintings will open your heart and your mind."
ERIC JONSSON
San Francisco,
California
U.S.A.
1 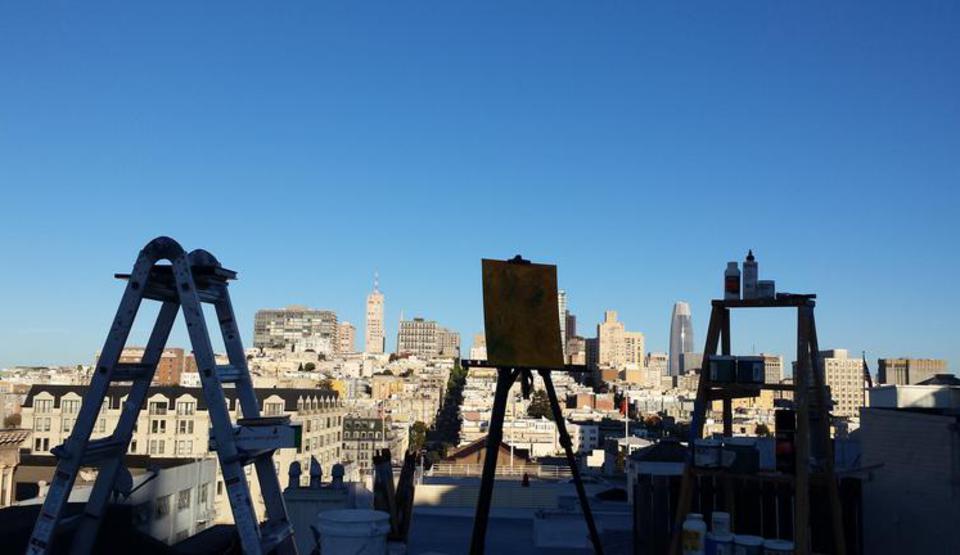